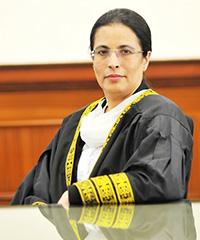 Mrs. Justice Ayesha A. Malik, before her elevation to the Supreme Court, was serving as a Justice of the Lahore High Court since March 2012.

Born in June 1966, her primary education was completed from schools in Paris, New York and London. She acquired her B. Com from the Government College of Commerce & Economics, Karachi and her LLB from the Pakistan College of Law, Lahore. She went on to do an LLM from Harvard Law School where she was named a Landon H. Gammon Fellow for academic excellence.

Justice Malik started her legal career working at Fakhruddin G. Ebrahim & Co and ultimately went on to become a Partner at Rizvi, Isa, Afridi & Angell (‘RIAA’), where she spearheaded the corporate & litigation department at the firm’s Lahore office. She has been a Lecturer in Banking Law (University of the Punjab) and Mercantile Law (College of Accounting and & Management Sciences, Karachi). She has also volunteered her time to the Hermann Gmeiner School, Lahore, an SOS project, teaching both English Language and Development in Communication Skills. She has also worked, pro bono, for various NGOs and has focused specifically on poverty alleviation programs, micro-finance programs and skills training programs.

Some of her judgments include those on the enforcement of international arbitration in Pakistan, declaration of assets in general elections and interpreting the relationship between federal and provincial governments under the scheme of the Constitution with reference to inter-provincial trade. So far as matters pertaining to women are concerned, these include declaration of the two-finger virginity test and hymen examination of rape victims as unconstitutional and violative of human dignity, and the declaration that policies promoting and facilitating women’s employment in Punjab were not discriminatory but were based on affirmative action. Justice Malik has always upheld merit as being the relevant criterion for admission in medical colleges as well as in employment issues in cases filed by women who have topped the merit and yet were denied admission or employment as on the basis of a gender quota.

In addition to her position on the bench, she has been a member of the National Judicial Automation Committee to ensure effective harnessing of information technology to ensure speedy dispensation of cases. She has also been part of the Court’s Committee on Case Management. She has been a Member of the Federal Revenue Board and she has monitored and the progress of work of, amongst others, special courts dealing with human trafficking cases, environment tribunals, and banking courts.

Being a Board Member of the Punjab Judicial Academy, she has contributed successfully to the academic developments therein and has also authored a Manual on Environmental Law for the assistance of judges. She was the Chairperson for Judicial Officers Female Supervisory Committee which dealt with issues relating to female judicial officers. She has worked with the academy on training judges on environmental law gender sensitivity family law and banking laws. She initiated the first Punjab Women Judges Conference in 2016. Successful conferences have since been held in 2017 and 2019 and have bought to the forefront gender perspectives and potential solutions to the need to improve the litigation process for female litigants.

In addition, she has several successful publications to her credit: i) An assessment of the Agreement on Trade in Financial Services: an assessment tof the Agreement on Trade in Financial Services under the GATA – The Journal of World Investment, Vol 1 No. 2, December 2000. 12th Edition of the Global Report 2004 on the Independence of the Judiciary – Pakistan Chapter. Pakistan Secular Laws. ii) The Oxford Encyclopedia of Legal History published by the Oxford University Press 2009, Volume 4, iii) Supreme Court of Pakistan 1956-2006 Selected Cases published by the Pakistan College of Law, published at the 50th anniversary of the Supreme Court of Pakistan, iv) She regularly contributed to the Merger Control, Getting The Deal Through, being an International Journal of Competition policy and Regulation Global Competition Review. v) She has contributed in the Oxford Reports on International Law in Domestic Courts, a publication of the Oxford University Press. 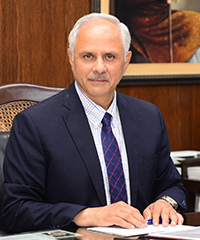 Prof. Dr. Asghar Zaidi, a renowned international social policy analyst and expert on population ageing, is the 31st head of this one of the oldest and most prestigious educational institution of Pakistan, namely: Government College University Lahore. He holds a PhD in Economics from world's top university i.e. University of Oxford, UK.

He has exceptional academic credentials with many articles published in the top ranked journals to his credit. He has authored five books and contributed to chapters in more than 25 international books. Apart from academic publications, he has written and contributed close to 50 official reports for world's most reputable organizations and governments including UN and European Commission.

Prior to returning to Pakistan in October 2019, he has been working for the last thirty-five years with different distinguished European and UN-affiliated organizations. He worked in universities in the UK (including University of Oxford and London School of Economics), the Netherlands (including Erasmus University and Tilburg University), South Korea (Seoul National University) and China (including Chinese University of Hong Kong).

His immediate past post was Professor of Social Gerontology at Seoul National University, a public sector University in South Korea ranked 36 in the World QS Ranking 2019. At the same time, he has also been Visiting Professor at London School of Economics and Senior Research Fellow at Oxford Institute of Population Ageing, University of Oxford, the UK.

Previously, he was Professor in International Social Policy at University of Southampton (UK); Director Research at European Centre Vienna (Austria); Senior Economist at OECD Paris (France); Civil Servant at UK's Department for Work and Pensions in London; and a Researcher at London School of Economics, University of Oxford, Erasmus University Rotterdam and Tilburg University.

In terms of his research and innovation, he took forward the work of Dr Mahbub-Ul-Haq in developing several Indexes of social welfare of older population. Since 2012, he has been the lead researcher in developing 'Active Aging Index' for the UN Economic Commission for Europe in Geneva and European Commission in Brussels. In 2013, he was the lead academic consultant in developing 'Global AgeWatch Index' for HelpAge International, covering 90+ countries including Pakistan. More recently, he developed a new index, namely 'The Asian Active Ageing Index', working alongside UN Economic and Social Commission (ESCAP) in Bangkok.